The Merchant Of Venice is unquestionably Shakespeare’s most controversial play- it covers such topics as anti-semitism, religious hypocrisy, racism, slavery, and the meaning of justice and mercy. As I have written before, few people read this play in school, but I believe that it has many lessons to teach our children. I also believe its lessons are also very much a part of the Christmas/ Hanukkah/ Kwanza holiday season, and here’s why:

You may very well wonder why this play about greed and prejudice reflects the warm holiday spirit. I would argue that, like cold winter snow, this play emphasizes the importance and the need for compassion, humanity, and generosity because without it society becomes truly frigid.

Merchant Of Venice takes an unflinching look at greed, prejudice, and religious hypocrisy, while at the same time retaining a hope for peace on Earth and goodwill towards men. 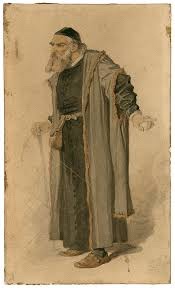 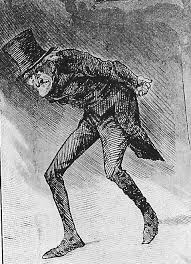 One of the best ways I can justify the connection between Merchant and the holidays is by comparing it to the quintessential Christmas story, Charles Dickens’ A Christmas Carol. In terms of tone, themes and especially characters, these two classics are very close indeed. Shylock is an ancestor of Scrooge- in addition to both being money lenders, both men are miserly, cold, and willing to destroy lives for wealth. Shylock even has a ghost that comes back to haunt him. Shylock mentions a ring that he got from his late wife Leah, similar to how Scrooge lost his only love, Belle. Just as Scrooge is a counterexample of everything that Christmas stands for, Shylock’s greediness, cruelty, and hatred of the people around him make him a figure to avoid, no matter what holiday you celebrate.

Merchant also raises questions about materialism, which we should all consider around the holidays. Shylock especially mentions this in quotes like: “You take my life when you take the means whereby I live.”

The themes of Merchant also reflect a modern multicultural holiday season. In one example which I wrote about before, The Prince Of Morocco has a great speech that calls to mind the concept of kuchijagulia, or self determination, one of the 7 principles of Kwanzaa. 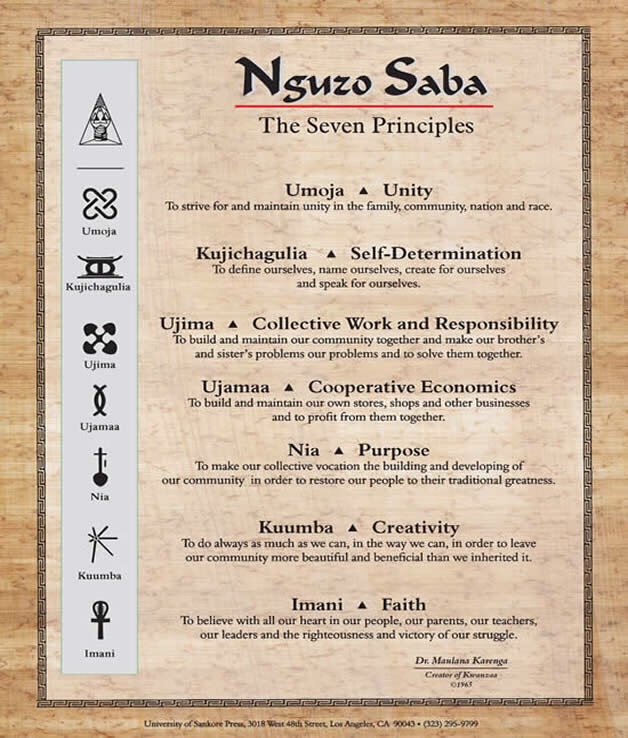 According to the official Kwanza website, kuchijagulia means, “To speak up for oneself,” and Morocco definitely does that:

Mislike me not for my complexion,

To whom I am a neighbour and near bred.

And let us make incision for your love,

To prove whose blood is reddest, his or mine.

I tell thee, lady, this aspect of mine

Hath fear’d the valiant: by my love I swear

The best-regarded virgins of our clime

Have loved it too: I would not change this hue,

Except to steal your thoughts, my gentle queen. Merchant Of Venice, Act II, Scene I.

Moracco’s unwillingness to change who he is makes him a model of the kind of pride African Americans celebrate during Kwanza. In addition Shylock, the Jewish moneylender, is also very proud of his heritage. His famous quip: “Sufferance is the badge of all our tribe,” expresses perfectly the resilience of the Jewish people, which of course is the central point of Hanukkah.

When it comes to Christmas, Antonio demonstrates a Christ- like self sacrifice, when he lets himself be arrested and nearly killed by Shylock.

▪ Ere thou shalt lose for me one drop of blood.

▪Antonio. I am a tainted wether of the flock,

▪ Meetest for death: the weakest kind of fruit

▪ Drops earliest to the ground; and so let me

▪ Than to live still and write mine epitaph.

While Antonio’s actions mirror Christ’s sacrifice. Portia’s famous “The Quality Of Mercy Is Not Strained,” speech, goes to the heart of the reason why Christ came to earth; to grant mercy to the sinners who would be damned otherwise

▪Portia. Do you confess the bond?

▪Portia. Then must the Jew be merciful.

▪Shylock. On what compulsion must I? tell me that.

▪ It droppeth as the gentle rain from heaven

▪ Upon the place beneath: it is twice blest;

▪ It blesseth him that gives and him that takes:

▪ ‘Tis mightiest in the mightiest: it becomes

▪ The throned monarch better than his crown; 2130

▪ His sceptre shows the force of temporal power,

▪ The attribute to awe and majesty,

▪ Wherein doth sit the dread and fear of kings;

▪ But mercy is above this sceptred sway;

▪ It is an attribute to God himself;

▪ Though justice be thy plea, consider this,

▪ Should see salvation: we do pray for mercy;

▪ And that same prayer doth teach us all to render

▪ The deeds of mercy. Merchant Of Venice, Act IV Scene I.

Shakespeare no doubt wrote these characters to reflect the Christian values many people celebrate at Christmas. Meanwhile the play’s comic subplot with Bassanio and Portia teaches Christians about generosity and mercy. As I have written before, the character Bassanio is the moral center of the play, and his journey mirrors many characters in classic Christmas stories who learn about giving and receiving, the true meaning of Christmas.

In Act III, Scene ii, Bassanio participates in the highest stakes Secret Santa gift exchange ever: three boxes of gold, silver, and lead are set before him. 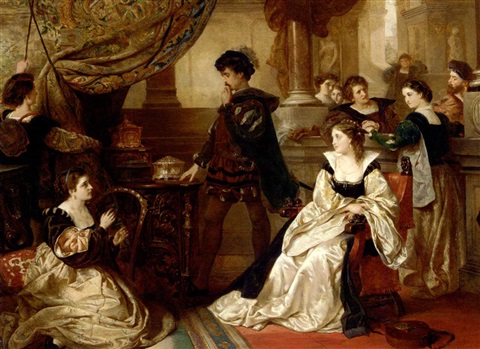 If Bassanio picks the right gift, he will be rich, powerful, and married to a beautiful woman, but the winning box is inscribed with a warning: “Who chooses me must give and hazard all he has.” Bassanio wins the gift auction, which means he may marry the beautiful Portia, but he gives her the choice to marry him or not: https://youtu.be/6IFSMgggS8k

[Music, whilst BASSANIO comments on the caskets to himself]

▪Bassanio. So may the outward shows be least themselves: 1440

The world is still deceived with ornament.

▪ In law, what plea so tainted and corrupt,

▪ But, being seasoned with a gracious voice,

▪ Obscures the show of evil? In religion,

▪ Will bless it and approve it with a text,

▪ Hiding the grossness with fair ornament?

▪ There is no vice so simple but assumes

▪ Some mark of virtue on his outward parts:

▪ And you shall see ’tis purchased by the weight;

▪ Which therein works a miracle in nature,

▪ Hard food for Midas, I will none of thee;

▪ ‘Tween man and man: but thou, thou meagre lead,

▪ Which rather threatenest than dost promise aught,

▪ Thy paleness moves me more than eloquence;

▪ And here choose I; joy be the conseque

▪ You that choose not by the view,

▪ Chance as fair and choose as true!

▪ Since this fortune falls to you,

▪ And hold your fortune for your bliss,

▪ Turn you where your lady is

▪ And claim her with a loving kiss.

▪ A gentle scroll. Fair lady, by your leave;

▪ That thinks he hath done well in people’s eyes,

▪ Giddy in spirit, still gazing in a doubt

▪ As doubtful whether what I see be true,

▪ Until confirm’d, sign’d, ratified by you. Merchant of Venice Act III, Scene ii.

Like the story The Gift Of the Magi, Bassanio prizes Portia’s love, and is willing to give her all he has in return, which is what separates him from the other suitors. Bassanio also understands it’s not the physical gift that is really the gift, it’s the love that it represents that really matters, which allows him to look past the outward appearance of the lead chest. Having gratitude for the gifts we receive and pledging our love to others is something that everyone should remember at Christmas and all festive occasions.

In Conclusion, it isn’t cheery, and it is not as hopeful as most holiday stories, but in the season when people of all faiths celebrate together, Merchant Of Venice is a great reminder of our shared humanity and how we can show love and mercy to our fellow people. 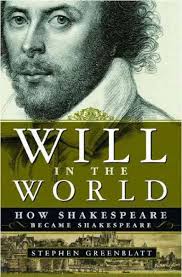 Book– Will in the world by Steven Greenblatt- An amazing analysis of Shakespeare’s life and career. The chapter “Laughter At the Scaffold,” traces the link between Merchant Of Venice and the real life treatment of Jews in the 16th century 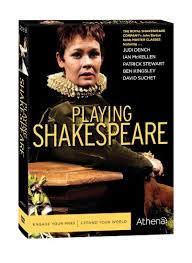 Movie– Merchant Of Venice 2004 Movie starring Al Pacino. I like the way the director films the drama documentary style, using a single handheld camera in most of the shots. Pacino is very good at playing Shylock as a bitter, cynical old man who is trying to survive in a powerful Christian country.