Movie pitch: They say you always hurt the ones you love. A bloody tragedy of love, betrayal, and jealousy. A noble black soldier, his adoring wife, and the devilish man who destroyed them.

Rated R for some racial slurs, violence, drinking, and language.

Othello is one of the easiest plays to understand because it is so intensely focused on just four people. It tells the story of a husband and a wife, who face challenges many of us can relate to, especially jealousy. Everyone worries about losing the people they love, and Othello, for all his courage on the battlefield, is so afraid of losing he wife that Iago can easily exploit that fear, and destroy Othello’s life.

For centuries, audiences, scholars, and actors have puzzled over the question of why Iago hates Othello. Is he a racist? Is he jealous of Othello’s position, his wife, his life? Some actors have played Iago as a closet homosexual, who wants Othello for himself, and is thus tormented because he knows Othello will never love him back. As I’ve said before the genius of Shakespeare is that there is no one clear answer, that’s for the director and actor to decide, which helps keep the play fresh and new for each audience that views it.

In light of the huge storm of sexual abuse scandals in America over the last year, which has permeated every industry and every level of society, Othello is just as relevant for its treatment of women, as it is for its treatment of race. Emilia is a character who demands that men treat women well, and Othello’s tragedy makes her words very prophetic, since his inability to trust his wife and his increasingly abusive behavior, is what led him to ruin and death. Every man who watches Othello should recognize the capacity for jealousy and violence within himself, and every woman should watch for signs of abuse and violence in her own partner, to protect herself from the kind of tragedy Desdemona suffered.
Famous Lines

Emilia: “But I do think it is their husbands’ faults

If wives do fall: say that they slack their duties,

And pour our treasures into foreign laps,

Or else break out in peevish jealousies,

Throwing restraint upon us; or say they strike us,

Or scant our former having in despite;

Why, we have galls, and though we have some grace,

Yet have we some revenge. Let husbands know

Their wives have sense like them: they see and smell

And have their palates both for sweet and sour,

As husbands have. What is it that they do

When they change us for others? Is it sport?

I think it is: and doth affection breed it?

I think it doth: is’t frailty that thus errs?

It is so too: and have not we affections,

Desires for sport, and frailty, as men have?

Then let them use us well: else let them know,

For more quotes and analysis of the characters, click here: http://www.shakespeare-navigators.com/othello/index.html 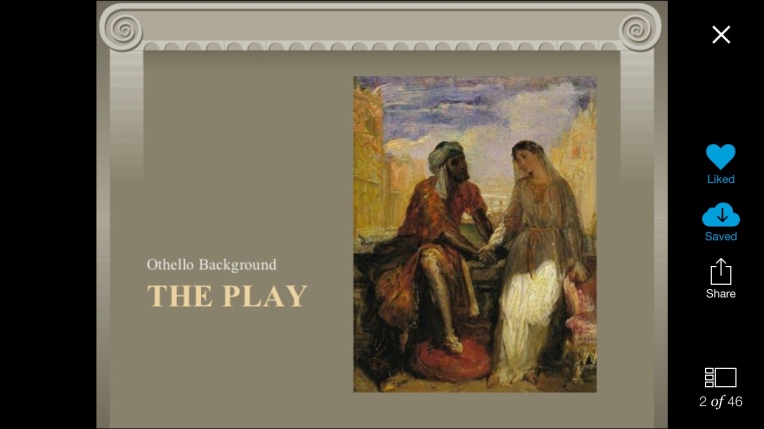 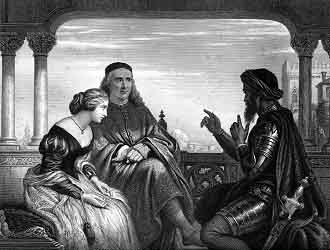 Zootopia– This academy award winning children’s movie has a sophisticated look at prejudice that echoes Shakespeare. Two of the leading roles- Chief Bogo and Nick Wild are like Othello, in that they are people fighting the world’s prejudices (including their own). Judy Hops, the main character is like Desdamona if she were less naive. There’s even a subplot where an adoring husband becomes a murderous savage.

Crash– A complex story about race, violence, and nature vs nurture.

Get Out – A horror movie about the dangers and stresses of interracial relationships.

Black-ish: This acclaimed TV show explores Othello’s conflict in reverse: Othello is a black man trying to assimilate into a white culture, while the family in Black-ish is trying to preserve their African American culture and heritage while also integrating into a predominantly white society.

As I mentioned in my “Was Shakespeare Racist?” post, Othello is quite probably a converted Muslim. Back in 1999, Adnan Syed, an Arab-American teenager from a Muslim family, was convicted of strangling his girlfriend. The prosecutor alleged that he might have killed teenager Hae Min Lee because of his strict Muslim parents, who didn’t approve of his dating her. The Serial podcast explores, among other things, the way that our preconceived notions of what it means to be Muslim can influence our decisions in the courtroom. 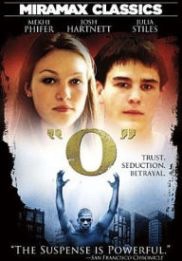 Contemporary adaptation about a high school basketball star named Odin, (who goes by O). Like Othello, O is very successful, and in a committed relationship with girl named Desi. My favorite thing about this interpretation is first of all, bringing Othello into a contemporary context, and also the treatment of Desdemona. I would argue that Shakespeare’s Desdemona is far too permissive and let’s her husband get away with some truly awful behavior before he tries to kill her. Julia Styles as Desi is very self-possessed and makes it very clear that she doesn’t like the way O is treating her, which makes it even more tragic at the end. In this version, you get the sense that she tried her best to stop him, and still failed.

This is an interesting adaptation in many respects. It is set in contemporary times, uses none of Shakespeare’s dialogue, and changes some of the character names, but it retains the basic story, and takes it in a clever new direction. In this version Othello is the first ever black British police chief. It brings up issues of affirmative action, gang violence, and even the question of whether Othello has an inferiority complex.

questions are in Jeopardy format)

ANSWER: The reason Iago gives as to why he hates both Othello and Cassio

QUESTION: What is “Othello’s promotion of Cassio over Iago?”

ANSWER: The name of the man who agrees to help Iago in his revenge

ANSWER: The name of Desdemona’s father

QUESTION: WHO IS Brabantio?

ANSWER: The term Iago constantly calls Othello, instead of his name

QUESTION: What is “The Moor?”

ANSWER: The really gross term Iago uses to describe the activity Othello and Desdemona are engaged in?

QUESTION: WHAT IS “The Beast with 2 Backs?”

ANSWER: The crime Brabantio charges Othello with, in order to win his daughter

QUESTION: WHAT IS witchcraft?

ANSWER: This is the one thing Othello DOES NOT mention in his life story:

QUESTION: WHAT IS “honest”

ANSWER: What Iago suggests to Roderigo to do instead of drown himself

QUESTION: WHAT IS Make money, or “drown cats and blind puppies?”

ANSWER: The name of the foe Othello is sent to fight

QUESTION: What is Ottoman Turks?

ANSWER: The name of the island Othello is dispatched to by the Duke

QUESTION: What IS Cyprus?

ANSWER: What Iago suspects Othello has done to his wife Amelia

QUESTION: What IS Commit adultery?