Because this is the Month Of Love, I wanted to post about one of the greatest marriage plays in the Shakespearean Cannon. Tradition has it that Shakespeare wrote The Tempest to celebrate the wedding of King James’ daughter on February 14th, 1613

Movie Pitch- A lavish fantasy on an enchanted island full of magic, romance, beauty, and intrigue

1.Prospero is a very interesting character. He is both the the ancestor of the benevolent magician like Gandalf or Dumbledor, and the prototype mad scientist like Dr. Frankenstein . He uses his magic to help his daughter and he frees Ariel at the end of the play, but he is also vengeful and nearly kills several people.

2. Many scholars, actors, and directors have interpreted Caliban and Ariel as Shakespeare’s slaves, and the play can be interpreted as Shakespeare’s dubious feelings about colonialism and the slave trade. Shakespeare wrote the play right when his countrymen began colonizing America, where they exploited the “magical” resources of the country and treated its indigenous people as heathen slaves.

3. Because this is one of the last plays we know Shakespeare wrote before retiring in 1613, and because the play is about a man who weaves magic with his words, many people speak of The Tempest as a valedictory for Shakespeare. Likewise, scholars have written that when Prospero tires of the island and his magic, Shakespeare must have felt the same way about his art. It is tempting to parallel Shakespeare with his most powerful character, but it might simply be that Shakespeare had to show Prospero as tired of magic, given that his new patron made it illegal. Given King James’ well-known obsession and fear of the occult, Shakespeare wouldn’t want to alienate his audience by seeming to endorse witchcraft.

Frankenstein Arguably the way Prospero treats Caliban is reminiscent of the way Dr Frankenstein treats his creation– he is terrified of Caliban because of his ugliness and angry temper, and equally afraid that Caliban will beget a race of monsters. Nevertheless, both the scientist and the magus learn that the only way to control their creatures is to acknowledge them.

Alladin Ariel is basically Prospero’s genie and performs his bidding until his master releases him. Both stories show that power over another person is by its very nature dehumanizing. Prospero learns that the only way to be free from the island is to forgive his brother and release his magical servants.

Basically any summer blockbuster. As the Sourcebook Shakespeare mentions, The Tempest has the greatest amount of music, dances, effects, and exotic characters in the Shakespearean cannon. Since the author wrote it for a royal wedding, he pulled out all the stops to make the play a feast for the eyes and ears of his imperial audience.

Breaking Bad Walter White creates an empire using his mind, but he secretly knows that the power he wields will destroy him.

Work Inspired by The Tempest

◦A Tempest (play) by

◦A Series Of Unfortunate Events: The Reptile Room

◦The Tempest (Opera) by Guisseppe Verdi

“Be not afeared” “Our revels now are ended.” “We are such stuff as dreams are made on, and our little life is rounded with a sleep.”

“O brave new world that hath such people in it.”

For more quotes and analysis of the characters, click here: http://www.shakespeare-navigators.com/JC_Navigator/index.html

Source: Unknown, but most credit William Strachey’s account of a 1609 voyage to Jamestown Virginia, and Montaigne’s essay, “Of the Cannibals,” 1603.

Setting: An enchanted island somewhere between Tunis in Africa and Milan in Italy.

Prospero “The wronged duke of Milan,” who was forced out of power by his evil brother Antonio. He is now a powerful magician who can control the weather, bend spirits to his command, even raise the dead! Through the course of the play, he sets the stage for his master plan to get revenge on his brother, regain his dukedom, and marry his beautiful daughter to a noble prince.

Note: tradition holds that Prospero was originally played by Shakespeare himself.

Miranda Prospero’s kind and innocent daughter. She has lived with her father on the island for 12 years and has never seen another human. She is intrigued by all the new people who wash up on the island, and frightened by her father’s attempts to drown them.

Ariel Prospero’s spirit helper, (whom he never calls a slave). (S)he is often associated with the air- she can fly, sing, and she creates the titular Tempest that sends the king’s ship to Prospero’s island. Ariel loves to help Prospero, but also longs for his/her freedom. Helpful, fun, airy , servant, devoted, slave, child-like

Caliban Prospero’s other slave, who constantly curses and tries to escape Prospero’s bondage. Caliban was the son of a powerful witch who was banished to the island before she died leaving poor Caliban in Prospero’s care. Prospero taught him how to speak and treated him as an equal, until he attempted to rape Prospero’s daughter. Caliban longs to destroy Prospero and take control of the island

Prospero, once the Duke of Milan, has been trapped on a desert island for 12 years, along with his beautiful daughter Miranda. He was kicked out of Milan by his wicked brother Antonio, and the king Alonso. While on the island, Prospero learns some incredible magical powers, including the power to control the weather.

Prospero knows that his wicked brother is sailing on a boat right now, along with King Alonso and Prince Ferdinand his son. Also on the boat is Gonzalo, a sweet old lord who helped Prospero come safely to the island. To get revenge against Antonio and to get off the island, Prospero uses his magic to create a storm, (a tempest), in the first scene of the play, shipwrecking the men onto Prospero’s island.

When Miranda sees the ship split and all of the people go overboard, she begs her father to stop using his power. Prospero tells her the story of how Antonio sent them on a rotten boat to the island, and how, “by accident most strange,” his enemies are now on the shore with them. He then puts her to sleep with his magic, and summons his magical spirit Ariel.

Prospero and Miranda visit Caliban, Prospero’s slave. Before Prospero came to the island, Caliban lived on the island with his mother, the powerful witch Sycorax. After she died, Prospero was like a father to Caliban, until he forced him to be his servant.

Caliban refuses when Prospero demands that he fetch wood, so Prospero attacks him with magical cramps. Ariel uses a magical song to lure Prince Ferdinand to the place where he finds Miranda and falls in love with her at first sight. Prospero though, wants to make sure Ferdinand really loves his daughter, so he forces Ferdinand to carry logs.

Meanwhile GONZALO drags ALONSO, SEBASTIAN, and ANTONIO through the island looking for Ferdinand. King ALONZO believes his son is dead, so GONZALO tries to cheer him up: ARIEL plays an enchanted song to make ALONSO and GONZALO fall asleep. Still awake, SEBASTIAN AND ANTONIO plan to kill the king and GONZALO so SEBASTIAN can become king. ARIEL plays a song to awaken them and they continue their search for FERDINAND.

CALIBAN, caught in a rainstorm, hides in the sand. At the same time, he is discovered by a jester named TRINCULO

Meanwhile, FERDINAND, (working hard for PROSPERO), tells MIRANDA that he is truly in love with her:

PROSPERO sees FERDINAND and gives him permission to marry MIRANDA. To celebrate his daughter’s engagement, he puts on a magical show with dances and music. As CALIBAN, STEPHANO, and TRINCULO approach PROSPERO’s cell, ARIEL traps them and sends spirits to chase them off. Now that PROSPERO has punished all his enemies, he decides to set CALIBAN and ARIEL free, and re-unite ALONSO with his son FERDINAND. PROSPERO also decides to give up magic once he returns to Milan:

ALONSO gives PROSPERO back his dukedom and PROSPERO forgives his evil brother ANTONIO. ARIEL brings on CALIBAN, TRINCULO, and SEBASTIAN and PROSPERO forgives them as well. PROSPERO tells them that he will bring the ship back to Milan tomorrow, so that everyone can see the marriage between MIRANDA and FERDINAND.

◦ What are Caliban and Ariel?

◦Setting? The Blackfiars theater literally looks like a boat, which helps the audience visualize the storm.

Artwork (wave mouse over each image to find out the artist/ year). 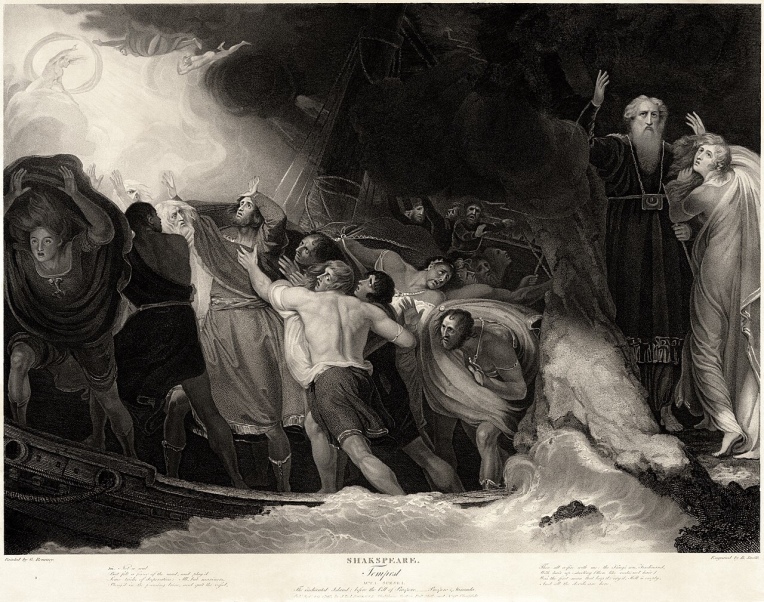 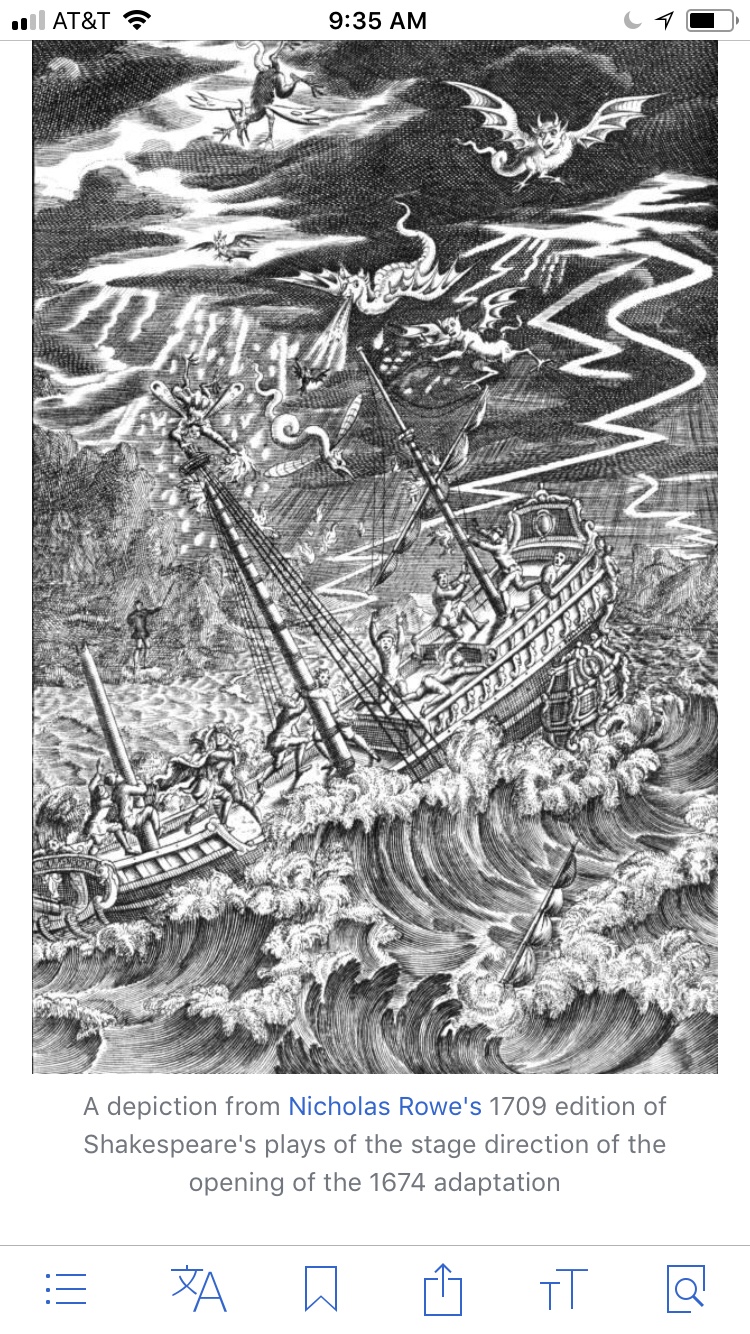