I’ve chosen to return to the blogosphere, now that my daughter is a little older. Still, I am still a dad, so I won’t be able to post as frequently as before. That said, August will be a HUGE month for this blog, since I have tons of material for our next Play Of the Month, RICHARD III!

For those of you unfamiliar with this truly excellent play, it’s the semi-true story of the infamous English king, who reportedly had a hump, a limp, and a withered arm, and chose to compensate for this by slaughtering his way to the throne!

Well, I gotta get back to work, so see you soon!

Hi everyone! Well, it’s nearly August, which means back to school. Everyone is looking in the stores for the latest educational gear to help young minds on the journey to knowledge. To hopefully aid your journey teachers and students, I’ve compiled some of my favorite Shakespeare apps. There are a lot of apps out there of course, and I couldn’t hope to review them all, but I had a few criteria to limit the results:

I also discovered that most Shakespeare apps out there seem to follow three basic categories: Shakespeare quotes, Shakespeare guides, and Shakespearean insults. Generally speaking, every app on this list is designed to either help you learn Shakespeare by showing and testing you on famous quotations, to help you engage with the text of the plays, or to just have fun making vintage Tudor insults such as: “I was looking for a fool when I found you. I desire we may be better strangers!” So here are the first five apps I am ready to recommend to students and teachers that bring the Bard into the mobile electronic age!

This app is a series of quizzes on Shakespearean quotes. It gets is title because the quiz goes on and on until you make three mistakes. Just like in baseball, three strikes and you’re out! I found it fun but not functional. You don’t learn what the quotes mean, and you’re not tested on how well you can recite it, it just quizzes you on which play the quote comes from. Still, worth a look. 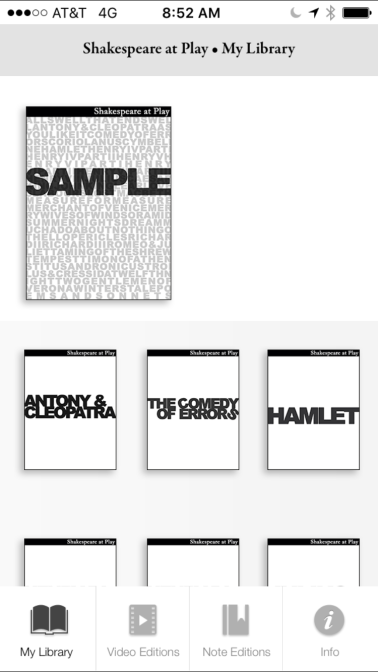 Combines the interactivity of an app, with the format of the  Sourcebook Shakespeare books I mentioned in my “Which Shakespeare Edition Is Right For You” post. It features annotated texts of Shakespearean plays,  videos, and a glossary. It’s really good stuff. I encourage teachers and students to use it. The only problem is that, while the plays are free, some features don’t become available until you pay to download them, but you might want to if you’re serious about studying the play.

This is one of my favorite apps ever. I would call it the Pokemon Go of Shakespeare apps. As you move your phone, you get a 360 degree of Shakespeare’s Globe Theater, as if you were actually there! Even cooler, if you put your phone or tablet over the Globe Theater logo, it will make a computerized theater appear on your phone’s camera in real time, just like the creatures of Pokemon Go! Furthermore, you can click on various part of the Globe to learn about the theater, how the plays were performed, and the colorful history of Shakespeare’s Company. I think this is a must-have app for anyone interested in Shakespeare.

Ok, I’ll be honest, this one isn’t free either, but it’s still incredible. I love that The Globe is well aware that not everyone can get out to London and see a play in Shakespeare’s re-constructed Globe theater, so they have a pay-per-view style app that allows you to watch videos of Globe Theater performances in your own home. You can also watch or stream international Shakespearean performances and documentaries right to your phone, tablet, or online at https://globeplayer.tv/

The best thing about this app is that you probably own it already! This is an extremely popular app for deciphering the meaning of song lyrics. Well guess what? People have also contributed commentary of some of Shakespeare’s famous speeches too! If you’re a teacher, you might consider having your class upload a Shakespearean text, and have them write line-by-line commentary to show just how well they understand it.

So that’s Part I of my look into my favorite apps Shakespearean apps, and I hope you enjoyed it. If you find any other apps you’d like me to review, leave a comment below!