Tomorrow is the first session of my course on Shakespeaere’s tragedies! I’m so excited to teach this great group whom I’ve worked with before. To mark this occasion, I present this silly, catchy, and informative song about the tragic fates of Cleopatra, Juliet, Hamlet, and others.

If you want to sign up for this course or request a private session, you can do so at http://www.outschool.com, or by scanning the QR code below:

Thanks for reading and have a good weekend! 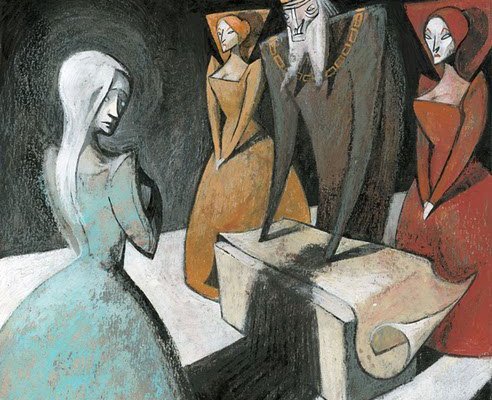 Shakespeare’s King Lear is an age old tale. Like Cinderella it has been reinterpreted throughout time and in many different cultures. Here are a few interesting highlights in the old legend and how it got to Shakespeare in the 1600s.

The Princess Who Loved Her Father More Than Salt

This is an old folktale from my favorite podcast, Journey With Story, which starts with the Cordelia/ Lear plot of a foolish king who banishes his honest daughter. Then through extraordinary circumstances it becomes a Cinderella story. I think at some point these two stories were one and the same until they diverged and one became a story about an absent father and a wicked stepmother, while the other became about a wicked father and a dead mother.

The ancient ballad of King Leir

The ancient ballad of King Leir, which helped inspire Shakespeare. It serves as a cautionary tale against flattery, and it places equal blame on Lear and his daughters:

The characters of Gloucester and his children, Kent, and the Fool are absent in this ballad, but unlike the fairy tale above, both Lear and Cordelia die in each other’s arms.

This play was written for Shakespeare’s rival acting company The Queen’s Men around 1590). Since the Queen was patronizing the company, most of their plays were government-funded propeganda. For instance, it was the Queen’s men who first did a tragedy of the wicked King Richard III.

If you watch the first 20 minutes of the documentary above, you will see that Wood and many other scholars believe Shakespeare must have worked for the Queen’s men, or at least performed their scripts, since they did their own versions of King Lear, Richard III, King John, and Henry V.

However Shakespeare got a hold of The Queen’s Men’s scripts, he didn’t adhere to them rigidly. Their King Lear follows the fairy-tale / history format of having Cordelia be banished, disguise herself as a peasant (like Cap ‘O Rushes in the earlier version), and eventually she is restored to her rightful place. Shakespeare’s version must have been a MASSIVE shock to anyone who read these old tales and ballads. In Shakespeare’s version, everyone dies and there is no guarantee that the kingdom will survive. Every other tragedy ends with a new king or emperor to take over the kingdom but Lear leaves the audience with a sense of apocolypse; that Lear’s madness and Edmund’s machinations have doomed England and all these characters’ lives will be erased by Time.

As pessimistic as Shakespeare’s Lear is, it does seem more true to life than the previous versions. Perhaps this is because of a legal case from 1603 that might have inspired Shakespear to adapt the story: In 1603, two daughters tried to have their father declared insane. By an astonishing coincidence, the third daughter, who protested, happened to be named Cordelia! Perhaps Shakespeare, (who had three children and was preparing to retire), might have been inspired by this case and worried he might suffer the same fate. 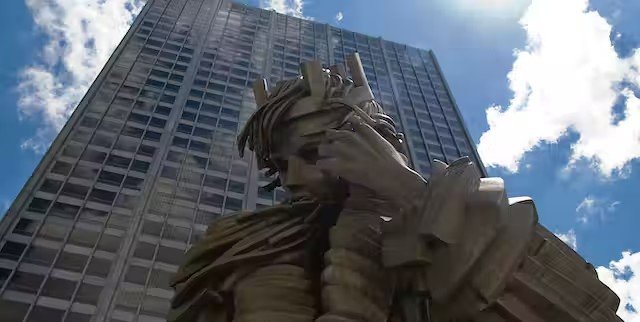 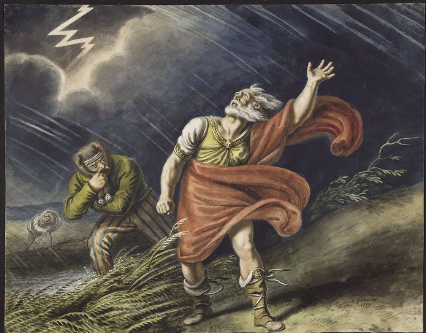 Lear at its core is a play about growing older, and not just for its title character. Goneril and Regan learn their father is a lousy dad and learn to stand up to him. Edgar learns about the cruelty of the world and how to deceive his enemies.

Lear, a king in pre-Christian England, is too old to rule, so he decides to divide his kingdom among his three daughters. He then tells them he will give the the kingdom to the one who loves him most.

Lear’ youngest daughter Cordelia, refuses to flatter her father, so she banishes her. He also banishes the Earl of Kent, who warns the king that his actions are foolish and rash. Finally, Lear demands that, although he resigns his kingdom, his daughters call him king and agree to house him and his knights in their castle.

Lear is not the only rash old man who is blind to his true danger. His friend the Duke of Gloucester has a bastard son named Edmund, who schemes to usurp his father’s lands and marry into Lear’s family. Edmund frames his legitamite brother Edgar which forces him to disguise himself as the mad beggar Poor Tom

After his daughters refuse to house him and his knights, Lear goes stark-raving mad. He runs out into a storm on the heath, wishing the Earth were struck flat and all mankind was destroyed. He is soon cared for by his Fool, and Kent, disguised as a commoner named Caius.

This scene from “Brave”

I just finished uploading my trailer for my new course on Shakespeare’s tragedies for your viewing pleasure:

The first session is on November 5th (Remember the day)! Hope to see you then.

I like the way it portrays the horror imagery of the play in sort of a European-manga animation hybrid. Admittedly, there are better ones in the series, but this one is still pretty neat.

To check out other episodes in the series, view this playlist:

In this 9 week course, students will discover Shakespeare’s greatest characters- Hamlet, Othello, Macbeth and others through games, dramatic readings, and interactive projects! -The class is designed to be ala carte- you can learn about all these plays, choose a specific play to focus on, or do the entire course. Each class will have a game of some kind, an engaging quiz, and a short explanation of the setting, characters, and motifs of one or more plays. Each class will also include a close reading of a famous speech.

Background on the Tragedies- the Wheel of Fortune

I will explain the basic structure of Elizabethan tragedies and the concept of Fortune, which is a motif Shakespeare uses in all of his tragedies. I will also debate the concept of “The Tragic Flaw:” the notion that otherwise good people are brought down by single character flaw. Finally, we will quickly summarize the premise behind all 11 of Shakespeare’s tragedies.

I will summarize Shakespeare’s two tragedies that are set in ancient Greece and provide commentary on their themes and ideas. I will also draw parallels between the Ancient Greek tragedies of Aeschylus and Euripides and Shakespeare, with a particular emphasis on the Greek philosopher Aristotle’s beliefs on the function of tragedy, which influenced every major drama for the last 2,000 years.

The Roman Plays- From Republic to Empire

We will take a bloody, backstabbing journey to ancient Rome, and discuss how Shakespeare shows through these four plays the dissolution of a republic into an empire. We will discuss the themes of democracy, dictatorship, mob rule, and savagery. Plays covered: Coriolanus, Julius Caesar, Antony and Cleopatra, and Titus Andronicus.

“Hamlet”- The man at the crossroads

We will explore the universality of this timeless tragedy, and do close readings of his famous soliloquies.

“Macbeth: The Tower built on lies-

In addition to the character and his speeches, I’ll draw parallels to the history behind the play, including witchcraft in the Jacobean era, and the Gunpowder plot against the king!

“Othello”- The Lovers and the Devil

I will talk about how Shakespeare dramatizes race and prejudice in the context of Othello’s struggle with prejudice and his own jealousy.

“King Lear”- The Blind Fools and the Hermit

I will discuss the complex plot of Shakespeare’s tragedy about old age, blindness, betrayal, and families ripped apart by greed.

I will teach the students to think like a director and develop a concept for the characters, set, lights, etc. I’ll also briefly take you through famous productions of these great tragedies by the Royal Shakespeare Company and others.

Get $10 off my class “Shakespeare’s Tragedies: The Fates of Men and Nations” with coupon code HTHESG5B2Q10 until Dec 31, 2022. Get started at https://outschool.com/classes/shakespeares-tragedies-the-fates-of-men-and-nations-xKCYUkC9 and enter the coupon code at checkout.

Basics Of Stage Combat:  Students will learn the basics of safely enacting a fight onstage, in preparation for a Shakespeare play. We will also learn about the history of sword fighting in the military and the duel.

My daughter really enjoyed taking this class. She was actually able to use her sabre and try out her routine on her father. Paul is quite knowledgeable about Shakespeare and made the class really fun by teaching a fight scene from Romeo and Juliet. It is amazing watching her practice with Paul over Zoom. I hope Paul will have. more combat classes, it is a different way to learn Shakespeare.

A virtual tour of Shakespeare’s London will get kids to interact with the culture of Elizabethan England.

In this one-hour course, your child will discover the enchanting world of science through a series of magical experiments. Learn about such topics as Astronomy, Static Electricity, chemistry, and optical illusions.

In this one-hour course, students will learn and play games that will explore the history behind Christmas traditions. We will also discuss the themes, characters, and famous quotes from Shakespeare’s play “Twelfth Night.”