Since Easter, and Passover are coming up, (and we are already in the middle of Rhamadan), I thought I’d examine Shakespeare’s depiction of other worlds both celestial and infernal. As the quote above says, philosophers and poets often wonder what greets us in the hereafter, so let me be your guide through Shakespeare’s poetic renderings of heaven and he’ll, accompanied by some gorgeous artwork from HC Selous, William Blake, and others.

The whitewashed images of Shakespeare’s childhood

Shakespeare was no doubt interested in religion. He quotes from and alludes to the Bible many times in his plays. More importantly, he lived in a time when the national religion changed three times in just 4 years! When Henry VIII changed England to a protestant country, the religious identity of England completely changed:

This change was not just felt in monestaries, but in all English churches. King Henry decreed that certain Catholic traditions like Purgatory, indulgences, and praying to saints were idolatrous, and were therefore banned in the Church of England. So, when Shakespeare’s father was called to destroy the “idolatrous” images of the Last Judgement in the Guild Chapel of Stratford’s Holy Trinity Church, he had no choice but to comply. If you click on the link below, you can see a detailed description of the images that Shakespeare no doubt knew well in his family’s church, until his father was forced to literally whitewash them.

Purgatory and the harrowing of hell

Like the images on the Stratford Guild chapel, the ideas of Catholic England didn’t disappear, they were merely hidden from view. Shakespeare refers to these Catholic ideas many times in his plays, especially in Hamlet, a play where a young scholar, who goes to the same school as Martin Luther, is wrestling with the idea of whether the ghost he has seen is a real ghost from purgatory, or a demon from hell, (as protestant churches preached in Shakespeare’s life).

I’ve written before that the ghost of Hamlet’s father teases us with the possibility that he might be a soul in purgatory, the Catholic afterlife realm for those not evil enough for Hell, nor good enough for Heaven. At the height of their powers, monks and bishops sold prayers called indulgences that supposedly allowed a soul’s loved ones to buy them time out of purgatory, thus making them able to ascend to Heaven quicker. The image above is an illustration from Purgatorio, part of Dante’s Divine Comedy, where he visits the soul of
Buonconte da Montefeltro, who is languishing because he doesn’t yet have the strength to get out of purgatory and enter Heaven.

Of course, the Tudor monarchs Henry VIII and Elizabeth I abolished indulgences and proclaimed that purgatory itself didn’t exist, but ideas can’t die, and I feel that Shakespeare was at least inspired by the notion of purgatory, even if he didn’t believe in it himself. 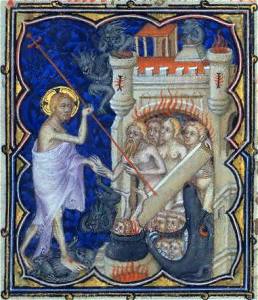 “It Harrows me with fear and wonder.”

Lucifer and the vice of kings

As a young boy, William Shakespeare was entertained by medieval Mystery plays; amateur theater pieces performed by local artisans that dramatized great stories from the Bible. We know this because he refers to many of the characters in these mystery plays in his own work, especially the villains. King Herod is mentioned in Hamlet and many other plays in and many of Shakespeare’s villains seem to be inspired by the biblical Lucifer, as portrayed in Medieval Mystery Plays.

In this short video of the Yorkshire Mystery play “The Rise and Fall of Lucifer,” we see God (voiced by Sir Patrick Stewart), creating Lucifer as a beautiful angel, who then, dissatisfied with his place in God’s kingdom, is transformed into an ugly devil. At first, Lucifer mourns losing his place in Paradise, but then finds comfort by becomming God’s great antagonist.

Compare this character arc with Shakespeare’s Richard of Gloucester, who also blames his unhappiness on God, (since he feels his disability and deformity are a result of God’s curse). Richard is angry with God, nature, and society, so he wages against them all to become king.

“Then since the heavens hath shaped my body so, let Hell make crook’d my mind to answer it.”

“All is not lost, the unconquerable will, and study of revenge, immortal hate, and the courage never to submit or yield.”

Claudio. Ay, but to die, and go we know not where;
To lie in cold obstruction and to rot;
This sensible warm motion to become
A kneaded clod; and the delighted spirit
To bathe in fiery floods, or to reside
In thrilling region of thick-ribbed ice;
To be imprison’d in the viewless winds,
And blown with restless violence round about
The pendent world; or to be worse than worst
Of those that lawless and incertain thought Imagine howling: ’tis too horrible!

“Methought I crossed the meloncholy flood with that grim ferryman the poets write of, into the kingdom of perpetual night.”