Here’s an article I origionally wrote for the Shakespeare Birthplace Trust about the famous and famously funny scene in Twelfth Night, where Toby tricks Viola in disguise to fight a duel with the cowardly Sir Andrew Aguecheek.

He Cannot By the Duello Avoid It

“He Cannot By the Duello Avoid It!” by Paul Rycik

Hello! To celebrate Shakespeare’s 449th birthday, I’d like to discuss the concept of judicial combat or licensed dueling. Most of Shakespeare’s aristocratic patrons would be intimately familiar with the arts of swordplay. Furthermore, Shakespeare as a trained actor would have studied fighting to accurately replicate it onstage. This is why Shakespeare takes many opportunities to mention dueling culture in his plays, especially within the comedies. 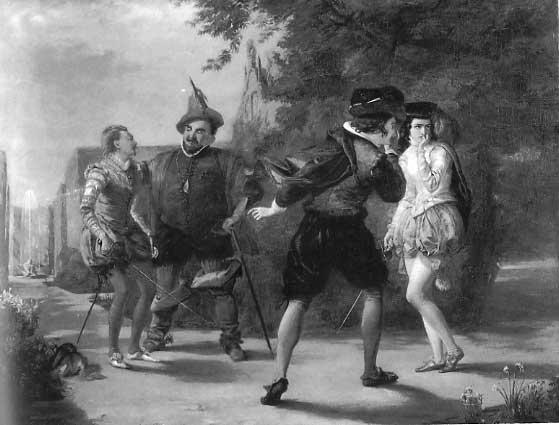 Shakespeare uses duel references to comic effect in plays such as Twelfth Night, in which Sir Toby Belch convinces the cowardly Sir Andrew to fight Viola, a woman disguised as a man. Both combatants are cowards, but according to the law of arms, both of them have to fight, though neither one wants to or knows how: “He cannot by the duello avoid it” Twelfth Night Act III, Scene iv.

A more serious example of duel culture occurs in “Much Ado About Nothing. In Act IV, Scene I, Claudio has accused his fiancée Hero of adultery in front of the whole town, thus dishonoring her. Her cousin Beatrice is so furious with Claudio, she claims that, were she a man “I would eat his heart in the marketplace!” Eventually, Beatrice convinces Claudio’s friend Benedick to challenge Claudio to a duel. This seems harsh at first, but when one considers the context of judicial combat, it becomes clear that Beatrice is actually being totally rational, and wishes Claudio’s death for an important purpose- to vindicate Hero.

In Elizabethan society, when a woman was accused of adultery, a champion could fight to the death on her behalf in a judicial combat. This is why Beatrice famously asks Benedick to kill Claudio in Act IV; if Benedick kills Claudio in a duel, Claudio’s death would prove by divine influence that he accused her falsely, and Hero would at last be free from shame. However, when she is left alone with Benedick, she is full of conflicting feelings of love for him, which is why at first she hesitates to ask for his help:

Benedick. Surely I do believe your fair cousin is wronged.

Beatrice. Ah, how much might the man deserve of me that would right her!

Benedick Is there no way to show such friendship?

Beatrice. A very even way, but no such friend.

Benedick. May a man do it?

Beatrice. It is a man’s office, but not yours, Much Ado About Nothing, IV.i

In the last line, Beatrice hints at the office of a champion to fight for a dishonored woman. As a nobleman, Benedick may legally challenge Claudio to a duel and vindicate Hero, but Beatrice also knows that she cannot ask him to fight his best friend. Nevertheless, Beatrice wishes someone would fight to repair Hero’s honor, and her pleas eventually convince Benedick to challenge Claudio.

In our century, the idea of dueling to vindicate a woman from adultery is somewhat lost in translation, but the idea of men standing up for what is right on behalf of a lady is at the heart of chivalry, and certainly speaks to us as strongly now as it did in 1599. Therefore an understanding of the concept behind this duel helps the actors and audience to appreciate the richness of Shakespeare’s characters and their attempts to do the right thing, even through questionable means.

Bonus video if time: Me (Paul Rycik) performing Much Ado Act IV Scene I at the Blackfriars Playhouse in Staunton: http://www.youtube.com/watch?v=f69j8vIrycA

Below is the full scene Twelfth Night duel scene

One thought on “The Duelling Scene in Twelfth Night ”