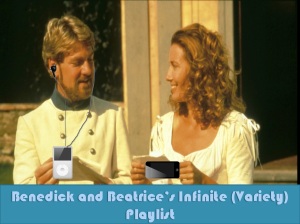 Have you ever met people who go around everywhere with their MP3 players and their earbuds? The kind of people who walk around playing their own personal soundtrack? Well, what do you think would happen if the characters from Much Ado did this, and you happened to glance at Benedick or Beatrice’s iPod? Well that’s what we’re going to pretend in a little game I like to call “Benedick’s Infinite Variety Playlist.” Below is a list of the major events in the play that happen to Benedick. The problem is: they’re all on shuffle. Your job is to figure which song matches which event, put them in chronological order, and submit your answer in the comments below. Later this week, you can play the same game with Beatrice’s playlist. Have fun and remember, as Shakespeare said: “If music be the food of love, play on!”

Enjoy this game, and leave me a comment if you think you know the correct order of the playlist (that is, the order of the sequence of events in this show).
Thanks!
-The Shakespeare Guru

One thought on “Benedick and Beatrice’s Infinite (Variety) Playlist”